Pixies of the Forest - Where to Play in MI 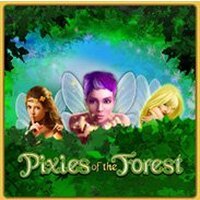 Play this game now at:

This page shows information about the availability of Pixies of the Forest in the state of Michigan.

For other states, choose your preferred location with the selector at the bottom of the page.

This chart shows how the number of casinos offering this game in MI has changed over time.

Pixies of the Forest

Pixies of the Forest is a classic video slot from industry giant IGT and High 5 Games. With a 33 coin bet, you get 99 paylines of action, so each coin gets you 3 paylines.

With a sylvan theme featuring several different fairy pixies, the green background and magical soundtrack are a natural fit.

After we cover the basics, I will describe the most important feature of this game, the Tumbling Reels feature.

Pixies of the Forest Slot Layout 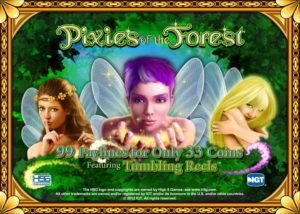 The video slot features five reels with three visible symbols on each. The 99 paylines are determined by a concept called Connected Lines, where if the corners or sides of squares meet, then they form part of a valid payline. 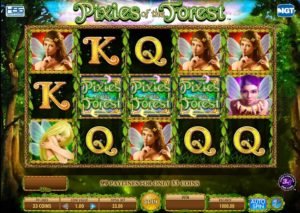 The symbols are drawn from a small inventory. There is a wild symbol, although it only appears on reels 2,3, and 4 in the base game. The most valuable symbol is the game logo. Next up there are three different pixie symbols, one blonde, one brunette, and the best-paying one with pink hair! The symbol set is completed with three card ranks: K, Q, and J.

So, just what is this tumbling reels feature all about? Well, if you have played the arcade-style game Bejeweled, you'll be familiar with the idea. Basically, any time that you have a winning combination on a spin, the win meter will increase by the appropriate amount, and then something unusual happens.

All the symbols involved in any of the winning combinations dissolve, leaving an empty square on the screen. 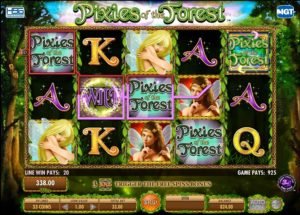 In the example above, all of the logo symbols will disappear, as will the Wild symbol and the two blonde pixie symbols. All of those symbols were involved in the winning combinations. After that, all of the remaining symbols will fall to the bottom of their respective reels, and new symbols will drop in from above.

If you're lucky, that means another round of paying combinations, and yet another set of symbols dissolving. In fact, these multiple chains of tumbling reels lead to some of the biggest wins in the game.

The bonus round is triggered by getting three Bonus symbols, which are only available on reels 1, 2, and 3. 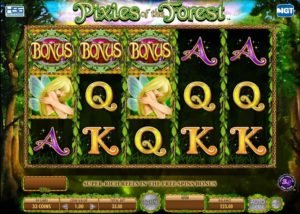 Once you trigger the bonus, you'll need to choose one of the three symbols to reveal how many free spins you get. In this example, the options ended up being 8 spins, 9 spins, or 11 spins. But I ended up with the 8 spins. 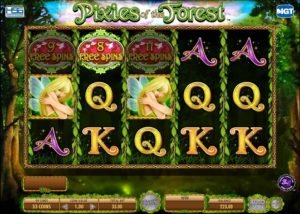 While there is no multiplier during the bonus, and the bonus cannot be retriggered, there is one aspect of the bonus round that is a benefit. During the free spins, wild symbols can appear on reels 1 through 4, one more reel than in the base game. Of course, the main benefit is the fact that the spins are free!

You know, I generally like the games produced by High 5 Games. They usually feature attractive graphics and interesting bonus features. But for whatever reason, Pixies of the Forest just leaves me uninspired. The Tumbling Reels feature sounds like an exciting option, but in the actual game it just doesn't appeal to me. You rarely string together more than one repay, and the whole thing just seems a bit contrived.

But hey, different strokes, right? I'm sure that some people are big fans of tumbling reels, and this may be among their slot favorites.

In any event, because Pixies of the Forest is a long-time staple on casino floors, you can also find it at several of the Michigan casinos. Check the list above to see where you'd like to give it a spin.

Game History of Pixies of the Forest in Michigan

Events in the game history are listed with the most recent activity at the top of the list.

Each event line indicates that a casino added or removed Pixies of the Forest from their inventory on that date.

You may notice that some casinos drop and re-add the same game multiple times, sometimes on the same day. This happens occasionally when a new game is being launched or updated.

See something unusual? Our game history listings are based on our best effort to accurately track the constantly changing inventory of the casinos.

In particular, when we initially begin tracking a casino, the events generated may not reflect an actual change at the casino.

NOTICE: Casino links are intended for players age 21+. You must be physically present in Michigan to wager.
Not in Michigan?
© 2022 Bayview Strategies LLC